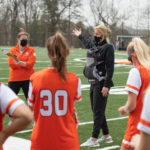 Caitlin (Young) Copelan is the Director, Founder and Recruiting Coordinator for the Sound Lacrosse Girls Program. Copelan started Sound in the winter of 2014 and the premier girls club has emerged as a top program in the area.