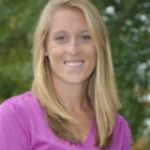 Meegan has been involved in CP LAX/Sound Lacrosse for the last 7 years. She has been playing lacrosse since she was 3 years old and grew up in Greenwich, CT where she played soccer, basketball, and lacrosse.  After grade school she went to boarding school at the Millbrook School in Millbrook, NY for three years. There she played on the varsity lacrosse team for all three years.  In 2004, her senior year she received the MVP award for her team. She then went on to play Division III lacrosse at at Roanoke College in Salem, VA.  As a sophomore Roanoke won their conference championship and went on to play in the NCAA tournament.

Meegan played four years at Roanoke College and finished her career with the single-season school-record of goals with 82. A two-time All-ODAC selection, Rourke posted 105 points, second in her conference, while her goals total tied a conference-best. As a senior, she finished third in draw controls (87), second in groundballs (82) and led the league with a school-record 56 caused turnovers. Rourke finished her career 10th on the career scoring list (168pts), seventh in goals (130), third in draw controls (126) and second in caused turnovers with 126 in Roanoke College History. Meegan is now currently a Physical Education teacher at New Canaan Country School.