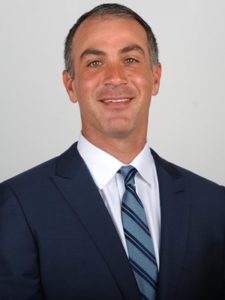 Copelan led the Stags into a new era beginning in 2015, as Fairfield joined the nationally-prominent Colonial Athletic Association. The Stags have made an immediate impact on the CAA, winning back-to-back regular season titles. Fairfield hosted the 2015 CAA Championship on newly-constructed Conway Field at Rafferty Stadium. In 2016, the Stags advanced to their first-ever CAA Championship Game.

Copelan was tabbed as the CAA Coach of the Year in 2015. In four seasons with the Association, the Stags have collected 22 All-CAA honors, highlighted by 2015 Rookie of the Year recognition for Will Fox ’18 and 2016 Rookie and co-Player of the Year nods for Colin Burke ’19.

Neubauer was also drafted by the Rochester Rattlers in the fourth round of the Major League Lacrosse Collegiate Draft. Neubauer was the highest-drafted Stag since Greg Downing ’07 was tabbed as the sixth overall pick and only First Round selection in program history in 2007. Neubauer was the 10th Stag during Copelan’s tenure to be drafted or signed as a free agent into the MLL ranks.

The 2014 edition of the club boasted a final record of 12-4, tying the program’s single-season wins mark. The campaign began with a record-setting 7-0 start and included the team’s first-ever ECAC Lacrosse League Regular Season Championship and a trip to ECAC Championship Game.

Fairfield made four consecutive ECAC postseason appearances from 2011-14, including three trips to the ECAC Championship Game. Along the way, the program earned several landmark victories. Copelan’s 2013 club recorded the Stags’ first-ever victory over the nation’s top-ranked team with an overtime triumph at No. 1 Denver, and the 2010 Fairfield team topped a Notre Dame club that went on to reach the NCAA National Championship Game.

Fairfield is the second head coaching stop on Copelan’s resume, who was the youngest head coach in the nation when he was hired to lead Marist College in 2004. In his first season with the Red Foxes, he was named the Metro Atlantic Athletic Conference (MAAC) Coach of the Year following a MAAC Regular Season Championship and the program’s first winning season in six years. In 2005, he led Marist to its first-ever NCAA postseason berth.

After his stint at Marist, Copelan held an assistant coaching position at the University of Maryland from 2006-08, rising to the offensive coordinator position for his last campaign with the Terps. Maryland reached the NCAA Tournament in each of Copelan’s three seasons, highlighted by a trip to the 2006 Final Four.

Copelan also served as the recruiting coordinator for Maryland in his final two seasons, with great success.  Inside Lacrosse ranked the Terps’ 2007 incoming class as the second best in the nation, and the 2008 class was dubbed as a third-best in the country. Individually, Copelan helped the Terps to secure six of 2008’s top 50 high school recruits.